Did you catch NASCSP’s article on the 2013 CSBG Annual Report in the latest edition of the Community Action Partnership’s The Promise magazine? Check it out below!

And just in time too! All over the country, there’s unprecedented need as the recession wreaks havoc on vulnerable communities. Local Community Action Agencies know this first hand. At NASCSP, we pull together your data to produce the most comprehensive analysis of the federal anti-poverty effort available anywhere. Our ability to quantify how we serve low-income communities across the nation sets us apart and demonstrates our value. The resulting annual report is a powerful visual representation of Community Action’s impact.

In FY2012, the CSBG Network touched thousands of low-income people, serving 20% of the 46 million Americans living in poverty. Our 1,045 agencies provided services to 16 million individuals, and 6.9 million families. This included 4.6 million children, 2 million people with disabilities, 2.4 million seniors, and 3.2 million people with no health insurance. 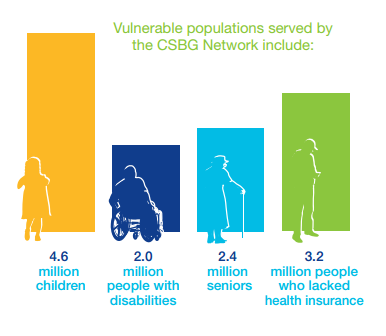 This Network also builds on the flexibility of the CSBG dollars to cultivate additional funding and partnerships. For every dollar of CSBG spent on anti-poverty efforts, nationwide the Network was able to leverage an additional $6.91. 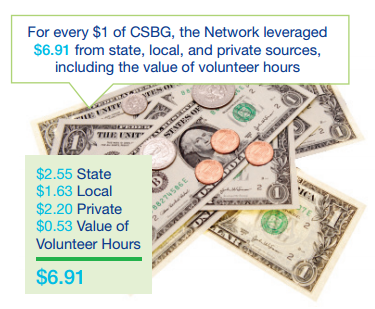 Strong results, given that the World Bank, one of the leading proponents of the concept, leverages about $3.00 for every dollar.

As a result of this added capacity from leveraged funds, the CSBG Network addressed 32.5 million conditions of poverty. That means we addressed 32,500,000 challenges or barriers such as lack of food, shelter, community resources, income, etc., to create greater stability.

In response to the dire statistics, take a look at the CSBG Annual Report on nascsp.org and use the national data to help tell the story that CSBG works.