The Weatherization Assistance Program (WAP) has been around for 45 years and has served more than 8m households, saving families money and making homes healthier and safer. From the beginning, women have been a driving force for improving service and increased access to WAP. This post is part of a series highlighting the contributions of women to WAP, their stories in the program, and why their passion drew them to it. Join the conversation by posting your story on social media with the hashtag #WomenOfWAP. 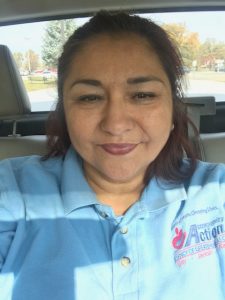 Ana Johnson is the weatherization production manager at Community Action Agency of Greater Kansas City (CAAGKC) in Missouri. She’s been bringing her knowledge, skills, and passion to work at CAAGKC for over seven years.

Before coming to weatherization Ana worked in construction in various positions and loved it. As a supervisor helping create safe and healthy housing for military families on military bases, she found she loved supporting people through construction. Serendipitously, one day one of her crew members told her about a job he thought she would be perfect for. That job was working in weatherization at the local community action agency. Ana applied and two weeks later got a phone call that the job was hers – she has been there ever since.

As the weatherization production manager serving a three-county area Ana does all parts of weatherization and so much more. She performs client outreach and education, partners with other agencies in the area, coordinates all aspects of measure installation work from scheduling to building contractor relationships, and conducts training too. She is an energy auditor and earned her QCI certification. Ana really is a jack of all (weatherization) trades!

Ana’s love for her work is evident in her voice and demeanor as she shared stories about clients, her staff and the work itself. She spoke of a client who asked, “can I just give you a hug?” and how profoundly rewarding something like that is. Hearing people’s stories and being able to connect with them and help teach them about energy efficiency is a very special part of weatherization.  Her favorite part is just helping people by making their homes better, safer and more efficient to live in.

When asked about women in weatherization Ana noted that women bring compassion to their work and that weatherization is not just construction and retrofitting work but individual, family and community support work. As far as advice for women thinking about getting into weatherization Ana says this, “it’s challenging to get in. It’s not always the nicest areas to work in (crawlspaces), they can be dirty spaces, but women are good at having some of the conversations with clients. It’s a great place to be if you love to help people and change people’s lives.”

As we give thanks this holiday weekend, we want to acknowledge and thank Ana and the other women in weatherization, helping to change families and communities with each client they serve.