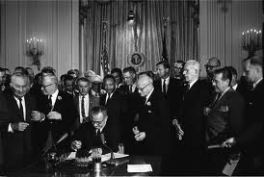 It’s May once again, and once again we celebrate Community Action Month and all we’ve accomplished as a network. This year, though, we celebrate one of those milestones that, however arbitrary, seems to carry great significance. It’s the 50th anniversary of the War on Poverty and the creation of Community Action. Poverty rates remain high, and inequality remains pervasive. Is it time to celebrate or to go underground and radically reinvent ourselves?

Just as it is for most people upon completing their fifth decade, there’s a certain bittersweet poignancy to the occasion for us as well, and an implicit invitation to ponder. The fifty-year mark is perhaps the first time one can look back on any human endeavor with anything like the perspective needed to gain wisdom. Timely food for thought comes in the form of The Legacy of the War on Poverty, a volume of analyses edited by Martha Bailey and Sheldon Danziger.

What caught my eye was the contributors’ repeated insistence that the War on Poverty was a complex interdependent set of policies and programs that cannot be examined in isolation. Now, that strikes a familiar chord with us, doesn’t it? Not surprisingly, the War on Poverty was a macrocosm of what we in Community Action were created to be. By Lyndon Johnson’s own description in his 1964 State of the Union Address, the War on Poverty was not a singular program or strategy. Rather, it was a holistic attempt to both end income poverty and end racial inequality, all in one fell swoop.

Altogether, the War on Poverty was a grand policy experiment. An important conclusion of this volume is that the combined influence of its programs and policies was greater than the impact of any individual program.

Sound familiar? Again, it makes sense that the Economic Opportunity Act would give birth to a program that is itself a multifaceted, complex strategy for leveraging resources, convening partners, and bringing together disparate programs around the common goal of addressing a community’s most pressing needs.  In looking back on fifty years of the War on Poverty, it’s hard not to see our own journey writ large.

Certainly we share the same challenges to assessing impact. We balk at being asked to reduce our entire work down to a singular indicator or a measure of any one particular type of intervention. We’re not obfuscating to avoid accountability. It’s just that such reductionism cuts across the grain of who we were created to be.  We’re a highly diverse bouquet of organizations, programs, and strategies designed to flexibly address the unique needs of each community. Like the legislation that created us, we are greater than the impact of any individual program we run. According to Bailey and Danziger, evaluating the impact of the War on Poverty requires a long perspective and examining a broad set of programs and outcome measures. Community Action will need to self-reflect and tell its own story in the same terms as well. 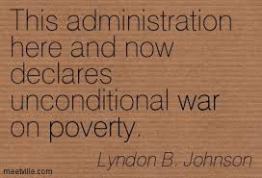 Another point of similarity is our near-miraculous ability to draw fire from both the Left and the Right. Opponents of government intervention saw the War on Poverty as government overreaching into social issues that should have been left to states and localities. The other side said that far from overreaching, Johnson had created a fatally flawed initiative by failing to commit near enough funding and political capital to the effort. Community Action also faces criticism from all sides. Some see the lack of singular outcomes matching an isolated intervention to an impact as evidence that we are not doing enough to end poverty. Others feel poverty is too complex to be addressed at all.

The authors of the Legacy volume conclude, though, that despite the challenges, the War on Poverty in fact achieved something of what it set out to do. As they examined broader economic changes they found that poverty actually has decreased over the past half-century. “Many of the era’s programs and policies significantly reduced poverty and increased opportunities, even if they were not large enough to offset the increases in poverty due to other economic and demographic changes.”

These achievements, though, only came about because of policymakers’ creative willingness to launch multiple experiments to target multiple issues all at once. What’s needed on this 50th anniversary is neither celebration nor retreat, but a radical recommitment to bold, creative, and highly innovative leadership.