This June, Ascend at the Aspen Institute released an extensive report serving as an update on the success of two-generation approaches across the country. Dedicated to putting an end to intergenerational poverty, Ascend commits itself to supporting innovative strategies and solutions that lift up entire families to ensure economic security and educational success that transcends generations. The two-generation (2Gen) approach is just one of these innovative strategies and has hit the ground running, with pilot programs in 32 states. By recognizing that the futures of both children and their parents are intertwined, the 2Gen approach is a framework that provides simultaneous resources to the different members of families.

As is seen within the CSBG network, the commitment to supporting families working towards self-sufficiency is more important now than ever. Community Action Agencies are critical partners in the 2Gen approach to fighting poverty. The practical and replicable efforts outlined in the Ascend report are instilling the 2Gen approach into all areas of their work and are paving the way for many states to follow in the future. As they rigorously track the already proven success of their policies, we look forward to learning about the innovative approaches that continue to develop in the anti-poverty field of work.

In its report, Ascend outlines the main focuses of 2Gen policies and the major takeaways from the state case studies can be found below:

The figure above on page 9 of the Ascend report, “States Leading the Way—Practical Solutions that Lift Up Children and Families,” shows the growing and bipartisan support for the 2Gen approach to poverty.

Similar to the work of Community Action, this aspect of the 2Gen approach is based on learning with and from families. By encouraging their active participation, states develop more successful programs and families form advocacy skills and positive relationships with peers, as just one example of a positive outcome.

Example: The Jefferson County Prosperity Project in Colorado found that engaging with families in the development of new programs fosters regular communication, honest feedback, and overall improvement in the success of their programs. While designing a new child support pilot intervention program, one of the first steps in Colorado was to create a series of focus groups to involve families. Staff members were pleased to find that parents and families had strong desires to be involved and support their children when they were given access to.

Engagement of Fathers and Noncustodial Parents

The number of children living in single-parent households has tripled since 1960, according to the 2017 US Census. States find that noncustodial parents are more likely to disengage both monetarily and emotionally from a child’s life, particularly due to current punitive approaches in policy.

Example: States have instituted 2Gen frameworks in their local programs to break barriers often barring parents from staying invested in their children’s lives. Utah, for instance, developed a “Invest in Dads, Too” program, aimed at helping previously incarcerated fathers become certified in diesel technology or receive educational training in parenting, life skills, or executive functioning. Results have shown an increase in parental engagement. 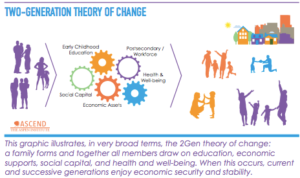 The figure above on page 8 of the report broadly summarized the 2Gen theory of change, outlining the process of providing necessary resources to all members of a family.

Systematic Integration of Change and Accountability

States with the most success in implementing 2Gen work are those who have incorporated the approach into all aspects of how they operate. In doing so, they intentionally engage the public, track results, and accept feedback on programs. While different states all start at different points in the integration of the 2Gen system, the similarities in development are uncanny and highly replicable as states move from a starting point of fragmented programs to sustained understanding and accountability systems.

Example: Georgia and Colorado created a roadmap of stages to follow in completely integrating the 2Gen approach. Later, Tennessee and Utah tested these stages in their own development.

Key to the success of a state’s 2Gen approach is the efforts and support of state legislation.

The approach to working with children and their parents in poverty is rapidly changing. As such, the leadership, data collection, and holistic management of programs supporting these communities must also change to provide sustainable support.

Example: In providing this culture shift, engaging with families is a key component. Additionally, “going public” to increase accountability of the shift is vitally important. Colorado boldly proclaims their commitment to the 2Gen process on their website to include community members, civic servants, and the like in their work. Utah provides an annual report to track progress on the issues within intergenerational poverty, another way to go public.

The figure below from page 31 of the report  provides a visual for how organizations institute a culture change within their program in order to fully commit to the 2Gen approach. By starting with a new mindset, aligning services to the ideals of the new mindset, and providing supports through these services the 2Gen approach is easily adapted into any program. 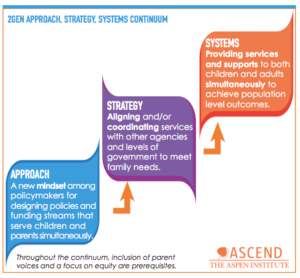 States are developing new ways to work with children and families by incorporating the latest research on brain formation, resiliency and trauma-informed care. By applying this research in working with communities, states can better design programs that lead to lasting, positive outcomes.

Example: The Connecticut Office of Early Childhood Education incorporated trauma-informed care for appropriate outcomes in home visitations. Tennessee provided training and education to staff members on interventions that focus on root causes and how to properly support families. This helped develop a Nurse-Family Partnership home visitation program more in line with the new understandings of trauma, brain science, and toxic stress.

Systems and Funding Working Together to Support the Whole Family

Braiding together the funding streams of varying support to families is essential to 2Gen success. By merging funding, families are saved time, stress, and confusion so that they have greater success in receiving the help they need.

Example: Utah merged together the funding of those eligible for TANF and WIOA. Families would be assigned one case manager who handled their entire application process, eligibility requirements, and necessary documentation.

There is an indisputable connection between family stability and a child’s development. Key to stability is economic and financial support. The “cliff and benefits effect” greatly undermines a family’s chances to maintain economic stability by causing families to lose benefit eligibility when their income increases. When a parent receives a raise or a better paying job, they often risk losing benefits, particularly affecting families struggling to climb out of poverty.

Example: States are working on programs and legislation to limit the harmful effect this has on families. Maryland created the Two-Generation Family Economic Security Commission, dedicated to researching key issues in economic success, for example.