In Honor of Pride Month - A Little History...

The History of Pride Month & the Uprising at the Stonewall Inn

During this month of Pride, we thought it might be a good idea to offer some historical context to what has become such a distinguishable and celebratory month for so many members of the LGBTQIA+ community. This year marks the 52nd year since the first Pride parade was organized by Brenda Howard, a bisexual activist; however, Pride month was first recognized on a national level by President Bill Clinton in 1999 and 2000. During his term, President Barack Obama declared the month of June LGBT Pride Month. This declaration is the result of a decades long battle for equality after a brave group of LGBT community members decided to take a stand in New York City.

On June 28, 1969, police raided the Stonewall Inn, a popular gay bar on Christopher Street in Greenwich Village, New York City. During this time, in every state but Illinois, acts of homosexuality were illegal and bars and restaurants that publicly served or had employees that identified as part of the LGBT community risked being shut down. Furthermore, the Stonewall Inn was one of many bars owned by the Mob – which both took advantage of and provided refuge for the LGBT community. During the raid police were met with retaliation from the patrons, staff members, and other members of the surrounding community – many of which were young, displaced gay men that considered Stonewall their only safe space. The uprising persisted until the early morning and police were forced to barricade thems   elves in the bar before things de-escalated and the crowd

One year later, the first Pride Week and Pride Parade took place on Christopher Street, organized by Brenda Howard and a group of other activists in New York. The parade would amass a crowd numbering into the thousands and stretched 15 city blocks at its longest. Soon after, many other cities began having their own Pride parades – but the New York Pride Parade is still one of the largest and most well-known parades to take place, with over 2 million people estimated to have taken part in 2019.

The Symbol(s) of LGBT Pride

A little over a decade after the riot at Stonewall, an artist in San Francisco with a passion for linking art and social justice named Gilbert Baker designed the first symbol of the LGBT Community. The flag would make its iconic debut in 1978 at San Francisco’s Gay Freedom Day Parade. In its original design, there were eight colored stripes and Baker assigned a meaning to each color: 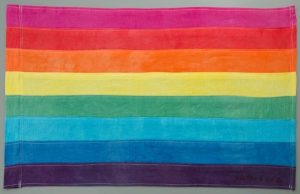 In the following year, the pink- and turquoise-colored stripes were removed due to cost and display considerations, resulting in the better-known six-color design. In 1994, nearly 20 years after the symbol was created, Baker created a mile-long rainbow flag that was carried down First Avenue in Manhattan. During the parade, Baker cut the flag into segments as standalone flags with one segment rushed off to Fifth Avenue for an impromptu protest march in front of St. Patrick’s Cathedral, the headquarters of New York City’s anti-gay Catholic archdiocese. In the many years that have passed since this time, there have been many other symbolic flags created to represent the many subcommunities of the LGBTQIA+ community! 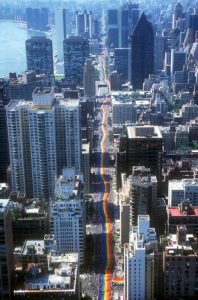 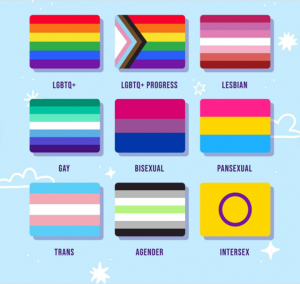 On June 26, 2015, nearly two years to the day after the Supreme Court struck down the Defense of Marriage Act in United States v. Windsor, same sex marriage was legalized in the United States in a 5-4 majority ruling of the Supreme Court. This day was the culmination of a decades long battle for equality for the LGBT community.

During this Pride month, we recognize the years of struggle for equality and the continued path toward equity for LGBTQ+ people.  NASCSP celebrates the opportunity to wish a happy Pride Month to all!