This guest blog was provided by Texas Department of Housing and Community Affairs, which oversees the 40 Community Action Agencies in Texas. 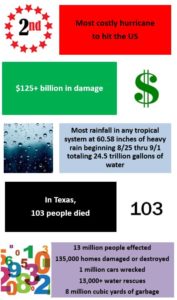 We are Texans, we expect a storm or two to come our way, but we’ll batten down the hatches and weather through it. The stats say we’ve had about 64 storms hit our coastline – but then came Harvey. . .

Hurricane Harvey made landfall in Texas on August 25, 2017, as a Category 4 hurricane. The storm headed up the coast and sat for days dumping rain on the area.
The 40 Community Action Agencies across Texas rose to the challenge – even when their own employees were impacted. Eleven agencies were directly impacted by Harvey and the remaining 29 were indirectly affected by providing emergency shelters and relocation services to the many who were displaced – some relocations were temporary and others permanent. Twenty-eight counties were declared a natural disaster area. #WeAre40Strong

Texas Community Action Agencies worked tirelessly in the aftermath of Harvey and here are a few of our successes:

Ms. Louise Riley, better known to her friends as “Lou”, is a proud 68 year old widow of a US veteran. She spent her time volunteering at the local VFW of Ingleside in honor of her late husband and all veterans. Lou had worked part-time for 6 years, saving up to purchase a home. In the summer of 2017, Lou was able to purchase the trailer home of her dreams with her savings and a loan from a friend. Two and a half months later, Hurricane Harvey arrived on the Texas coast and directly hit Aransas Pass forcing Lou to evacuate. When she returned on August 28th, she found her new home with no roof, no electricity or running water, and mold and mildew throughout. The city deemed her home uninhabitable and Lou was devastated. Having nowhere to go, Lou stayed in the home for 9 days crawling in and out through a broken window because the door would no longer open. Eventually a concerned neighbor notified local law enforcement fearing for her safety, forcing Lou to leave her home for good. With no money left and still having to pay for the lot that her trailer was on, Lou was left feeling helpless. This was the second time in her life that a natural disaster had taken everything from her. Knowing that she needed to get back on her feet, Lou applied for assistance from FEMA but she was denied 3 times. 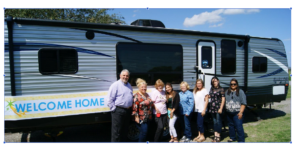 Feeling hopeless, Lou’s friend who had taken her in mentioned an event being held by CACOST in Ingleside, TX. Lou went to see if she could qualify for any assistance. With the help of AARP and CACOST, Lou was provided immediate assistance to pay for basic needs. Nearly 5 months after the disaster, Ms. Lou was still in need of her own permanent housing. In January 2018, Lou received a brand new 2018 RV Travel Trailer with AARP funds. CACOST assisted Ms. Riley in searching for an affordable location to permanently place her new home. Together they found a perfect location in Mathis, Texas, 45 miles away from her previous home. CACOST collaborated with a local RV Park who offered Lou a low monthly fee with all bills included and one month free rent. Lou has also found a new place to continue her volunteer work for veterans.

CACVT helped an elderly couple in Aransas County with a roof and interior ceiling and wall repairs. The couple applied for the program because their home was damaged by the storm. This couple was staying in the master bedroom with partial walls and ceiling because they had nowhere else to go. They were thrilled when they found out CACVT could help them through the repair program. They stated that they were finally able to sleep comfortably after the repairs, because they could no longer feel the air coming in their home. 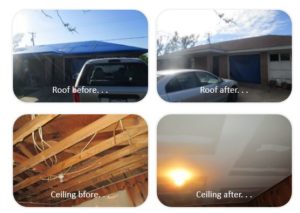 During Harvey an older client was rescued from her home via boat in the middle of the night. With very little time and rising waters all around her she had only seconds to grab what she could, leaving behind her dentures. When the floodwaters rushed in her home they were unfortunately swept away. With no dental insurance and on a limited budget she had lost all hope of ever getting them replaced. SETRPC, in collaboration with another non-profit organization, found a local dentist that would be willing to work with the agencies to replace her dentures at a discounted price. She was thrilled. When she received her new dentures she exclaimed “I’m so tired of soup; I’m getting me a big ol’ hamburger today!” A year after Harvey, she is still very grateful to the SETRPC and periodically checks in with the case managers to inform them of her home repairs. 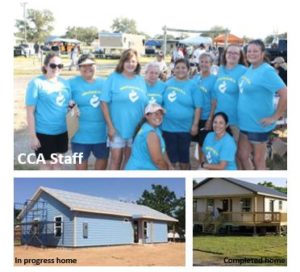 Combined Community Action (CCA) received a contract from the Texas Association of Community Action Agencies via AARP. Through this grant, CCA worked with the Fayette County Disaster Recovery Team (FCDRT) to purchase materials for families affected by Hurricane Harvey. CCA provided $5,000 per family identified by the FCDRT that were eligible for the Program. Eligibility requirements: someone in the home must be 50 years of age or older and income could not exceed 200% of poverty. CCA assisted 24 families in repairing/rebuilding their homes for a total of $120,000. CCA has partnered with the FCDRT who has a working relationship with both the Mennonite Disaster Services and United Methodist Army to provide the labor.

Jaime Longoria, Executive Director of HCCSA and his staff exemplified #BeCommunityAction when they stepped up to help their fellow agencies on the coast. They worked for weeks doing intake from an emergency services trailer. The assembled team assisted community action agencies impacted by Harvey and the clients they serve.  For 5 weeks, the team mobilized Sunday through Friday leaving Edinburg, Texas to drive up the coast 380 miles to Galveston. Using generators, the staff would set-up computers and process the necessary paperwork to serve the clients. Monday through Friday they served clients with gift cards, food boxes, hotel placements, and any other assistance they could provide.  The efforts the Hidalgo County CSA staff made to help their fellow CAAs and the people that were not in their service area exemplified all that Community Action stands for. #CommunityActionWorks

By: Karen Keith, Texas Department of Housing and Community Affairs

Part of my duties for TDHCA require me to travel this state – a state comprised of 254 counties and 268,820 square miles. It’s a bit of a drive wherever you go and the views are vastly different from the desert grasslands and valleys of west Texas to the hill county where I live to the lush piney woods of east Texas to the beautiful gulf coastline – each part of our state has its own beauty. One year later, the recovery from Hurricane Harvey in ongoing. 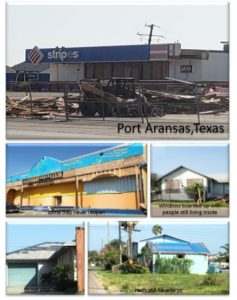 Last month, while driving in Port Aransas, a lovely island retreat on our coast, house after house, block after block, homes still have just a tarp across portions of their roofs. Businesses remain closed, even on main street, some permanently. People are living in homes where windows are boarded up while work slowly continues.

In June 2018, I was in Houston, a place I know well after living there 25 years. Driving down the streets I had driven daily, I witnessed whole blocks of empty storefronts, and streets where half the homes were either for sale or sitting empty. Places I had known well, eaten in, shopped at or walked around were now gone. On the journey up to Houston, I drove through Rockport where Harvey first came on land. I was stunned to see, almost a year later, street after street of foundations where homes once sat, or buildings with only a few walls, and missing roofs or blue-tarped roofs still in need of repair.

A year later, there is still so much to do. Small communities were hit hard as well as large cities. Harvey didn’t care if you had a lot of money or none. Low-income housing was destroyed in many areas. We have a saying here, “Don’t mess with Texas” – Harvey tried and he did a great deal of damage. It’s going to take Texas some time to recover from Harvey, but we will. The 40 agency Community Action Network helped in the days and months after the disaster, and will continue to help Texans get back on their feet. We are Texans. We are tough. We will recover.