A big shout out to the entire CSBG Network for your valiant work in submitting all the CSBG Information System (IS) Survey databases by the March 31 deadline! The data are still being reviewed, but a preliminary compilation of some of the key data points shows fairly similar high-level numbers to last year. For example, roughly 15 million people were served by a Network managing $13-14 billion in private, local, state and federal resources.

With its mission to alleviate the causes and conditions of poverty, the CSBG Network has always emphasized employment as a pillar of the comprehensive set of services offered. In FY 2013, the Network increased the number of people it was able to help secure employment by about 25% over the previous year’s data.  This is especially important given the fact that people with low incomes have much higher unemployment rates than households with higher income levels, as noted in the graph below. 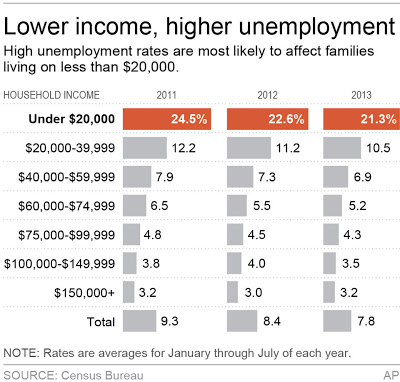 More information to come regarding FY2013 data as it is finalized. Thanks in advance to States and CAAs for responding promptly to questions regarding data as we wrap up our analysis.