CSBG Data Corner: Homelessness on the Decline and CSBG Helped!

The Atlantic and USA Today recently discussed the quiet decline of homelessness since 2005. We took a look at the CSBG data alongside the national homelessness data from the 2012 National Point-in-Time Estimates of Homelessness. The national trend is reflected in the number of homeless served by the Community Services Block Grant (CSBG) Network. The CSBG Network has served at least 68% of the homeless population over the past five years, which includes individuals living on the street or out of their cars, as well as families in emergency shelters and transitional housing. 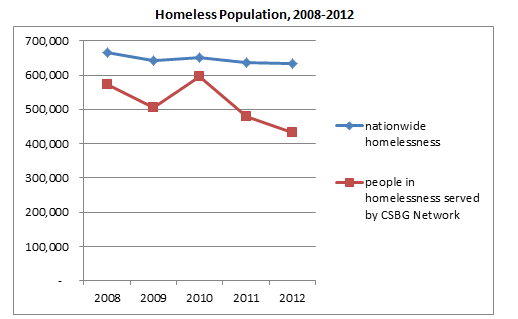 *Number of homeless people served by the CSBG Network was estimated using homeless families data from the CSBG IS Survey, and multiplying by 2.5, the average number of people per family, which is also based on CSBG IS Survey.

Other federal efforts such as the Homelessness Prevention and Rapid Re-Housing Program (HPRP) help address homelessness as well, and are part of the President’s 10-year plan to end homelessness. But local agencies throughout the CSBG Network know there is still much work to be done to help those still without a stable place to sleep. One example is the El-Ada Community Action Partnership in Idaho.

How has the homeless population in your area changed? What types of innovative initiatives or programs are helping to reduce homelessness in your state? Let us know!

Sources include the 2012 CSBG IS Survey