Yesterday morning the U.S. Census Bureau released its latest data on poverty, income, and health insurance coverage. The results showed that between 2018 and 2019, incomes increased, the official poverty rate declined slightly, and more people became uninsured. This data was gathered before the COVID-19 pandemic and therefore doesn’t reflect the situation for many families today. Rather, it shows the progress made in 2019 by those in the fight to end poverty, including those served by  the Community Service Block Grant (CSBG) and the Weatherization Assistance Program (WAP). 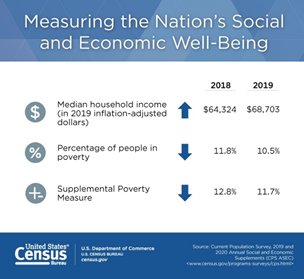 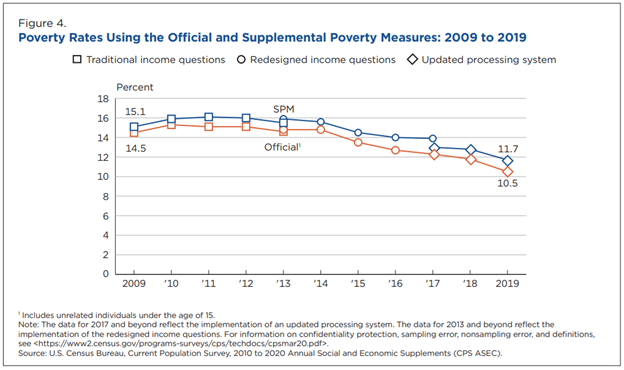 The new census data confirms that programs have been effective at assisting people lift themselves out of poverty. The Supplemental Poverty Measure (SPM) takes into account social programs and measures their impact and the graph below shows the specific effects of on helping people out of poverty. 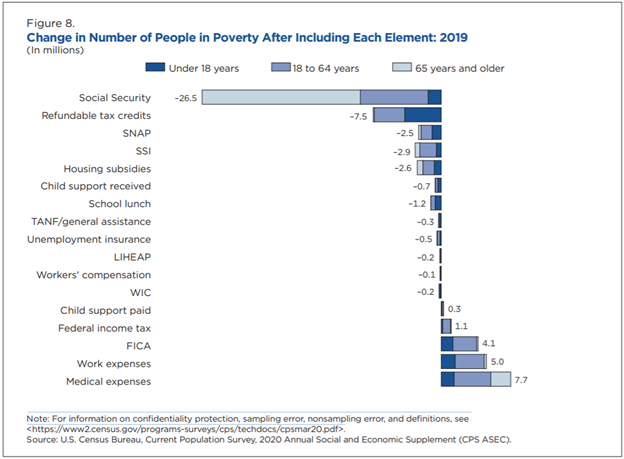 According to Census figures, Social Security had the largest impact and moved 26.5 million above the poverty line. SNAP, housing subsidies, school lunch programs, TANF, and LIHEAP together assisted nearly 7 million people in escaping poverty, showing the positive effect of the programs on communities.

The Census data shows the significant strides that have been made in the last decade in the fight to end poverty. However, for the 34 million people officially in poverty in 2019, the millions more uncounted or on the cusp, and the many more thrust into economic precarity in 2020 due to COVID, there is still much progress to be made.

In 2020, CSBG was empowered by Congress through the CARES Act with nearly $1 billion for addressing the fallout of the COVID-19 crisis. Supplemental funding will allow the CSBG network to serve thousands of people newly affected by hardship, in addition to helping millions more experiencing structural poverty. The CSBG network served over 7.3 million low-income families and 17 million individuals in FY2017. More than 2 in 5 individuals served were children and more than 1 in 5 were seniors. These groups were among the hardest hit by the COVID-19 crisis and the network will continue to spearhead innovation and advancement in the fight to end poverty both during the crisis and after.

Additionally, the COVID pandemic has highlighted the need for a safe, healthy, and efficient home. The Weatherization Assistance Program (WAP) serves thousands of households each year. Through energy efficiency services such as insulation, air sealing, new HVAC units, and more, weatherization reduces home energy usage. This is critical when spending more time at home during COVID. Weatherization has been extremely critical for seniors and medically vulnerable individuals staying home during a warm summer and will be equally critical in winter. Additionally, as we look down the road to economic recovery, WAP will support jobs and small businesses in our communities.

For more resources and analysis of the new poverty data, check out the following sources:
– U.S. Census Bureau
– Center on Budget and Policy Priorities
– Spotlight on Poverty and Opportunity