Highlights of the Census Report 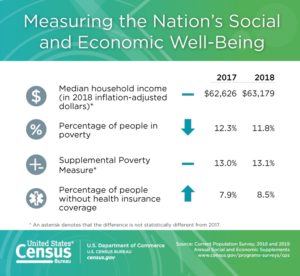 Impact of the CSBG Network on Poverty

The CSBG network tackles the complex issues of poverty by addressing the needs of individuals, families and communities within domains such as employment, education, health, housing, and more. Using programs and services tailored to local needs, the CSBG Network is working daily to help families achieve economic security. A few outcomes from Federal Fiscal year (FFY) 2017 include: 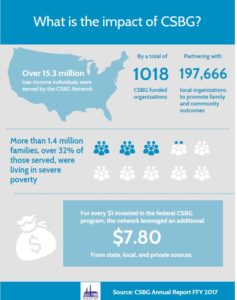 More Work to Be Done

The new Census data shows that while significant gains in the fight against poverty have been made, and that antipoverty programs are indeed reducing poverty rates, there are still 38.1 million people living in poverty who need continued support. However, programs like CSBG that are proven to move people out of poverty continue to face threats of funding cuts and full-scale elimination. In FY17 alone, the CSBG network served 15.3 million low-income individuals and over 6.3 million families. Of the 6.3 million families served by Community Action, over 32.7% were in severe poverty, living below 50% of the Federal Poverty Guidelines.

In addition to these annual poverty numbers, the data collected as part of the upcoming 2020 Census will also be critical to painting a picture of poverty in the U.S. The 2020 Census will play a key role in the development of anti-poverty programs and their funding levels. States and localities around the country are forming Complete Count Committees (CCCs) to increase awareness of and to support residents to respond to the 2020 Census. CCCs are instrumental in planning for and supporting participation for hard-to-count (HTC) populations which include households with low-incomes, renters, rural populations, single-parent headed households, and ethnic or minority populations. The national Community Action Partnership is working with local Community Action Agencies and CSBG State Offices in an effort to reach the HTC populations served by the CSBG network. Learn more about the Community Action Complete  Count Committee here.

Headed into 2020 and beyond, the CSBG network is at the forefront of innovation in the fight against poverty. Community Action Agencies are paving the way with innovative models such as bundled services, two-generation approaches, collective impact, and more. As it has for over 55 years, the CSBG network will continue to serve as a leader in the effort to eliminate poverty in America.

For more resources and analysis of the new poverty data, check out the following sources: