2016 Poverty Census Data: Progress Made, but Programs in Jeopardy

This morning the U.S. Census Bureau released its latest data on poverty, income, and health insurance coverage. The results showed a decrease in the poverty rate and an increase in median household income. This was the second consecutive annual decline in poverty and second consecutive annual increase in household income. The number of people without health insurance also decreased. Despite this progress, many of our nation’s core poverty fighting programs have faced recent budget threats from the Trump Administration that could reverse these positive trends.

While the results of the census report are encouraging, we know that too many Americans are still being left behind in the U.S. economy. Current proposals would cut nutrition assistance, roll back healthcare for millions of Americans, and deeply cut other services that have helped families escape poverty. Furthermore, the Administration has actually proposed cutting funding for the Census Bureau itself, which could severely limit its ability to collect accurate data surrounding poverty.

Both the Community Services Block Grant (CSBG) and the Weatherization Assistance Program (WAP) were proposed to be eliminated in the President’s FY 2018 budget. These are both proven programs that serve vulnerable families and communities across all 50 states, D.C., and 5 US territories. The WAP has weatherized the homes of over 7.4 million families since its inception and CSBG served 15.6 million families with low-incomes in FY 2015 alone. Check out these point by point responses to the FY 2018 budget for more information on WAP and CSBG.

The new census data shows; however, that antipoverty programs are indeed lifting people out of poverty. The Supplemental Poverty Measure (SPM) takes into account several social service programs and measures their impact. The graph below shows how many people were moved out of poverty as a result of programs like Social Security, tax credits, and SNAP. 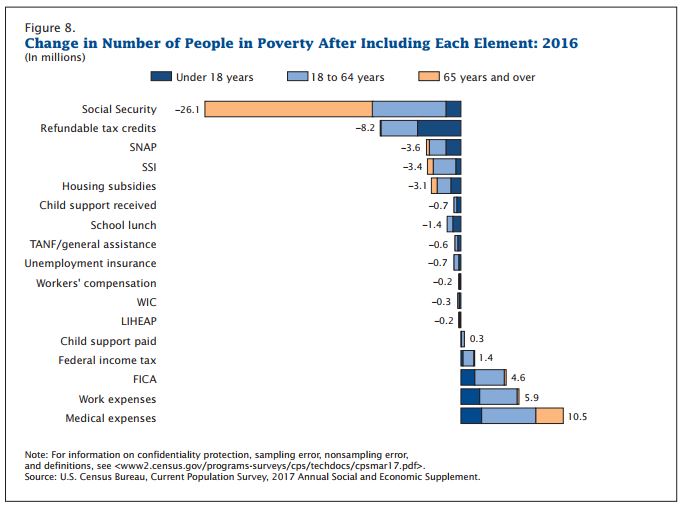 As indicated in the above census figure, Social Security was the most impactful anti-poverty program, moving 26.1 million individuals out of poverty. Refundable tax credits, like the Earned Income Tax Credit (EITC), moved 8.2 million people out of poverty. SNAP, housing subsidies, TANF, and LIHEAP also all had a measurable impact. This directly refutes the argument that antipoverty programs are ineffective and should be eliminated. The Center on Budget and Policy Priorities also notes that these figures do not correct for the underreporting of government benefits in survey data and actually understate how much these programs reduce poverty.

Still Work to Do

The new census report shines a light on the potential gains to be made from an even stronger federal investment in poverty solutions. Preserving CSBG, WAP, and other proven antipoverty programs will be essential to build on the progress already achieved and to address the disparities that still persist in the fight against poverty.

Author’s note: For additional information about the new poverty numbers, we recommend visiting the website of the Center on Budget and Policy Priorities and the Spotlight on Poverty and Opportunity Poverty Day 2017 page.