The NASCSP Weatherization Assistance Program (WAP) Funding Survey is the only comprehensive measure of all funds, including non-DOE funds, used in the program. Each year, the survey catalogues the funding and production levels for each grantee of the program as well as the source of that funding including the Low-Income Home Energy Assistance Program (LIHEAP), utility funds, and state funds among others.

Some highlights from this year include: 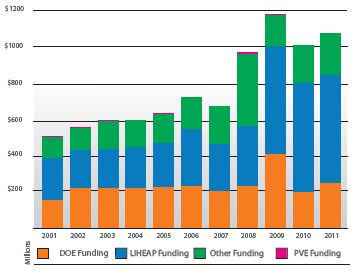 The composition of funds changes over time, the graph shows how the distribution of DOE, LIHEAP, and other funds has changed since 2001.