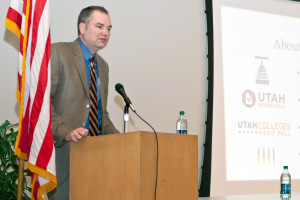 Democracy doesn’t end once the ballot is printed: candidates chosen. It’s an active process, taking place in every city, in every town, constantly adapting to the needs of the people. Democracy is a daily process of citizens interacting with their representatives, discussing and voicing concerns.

Fighting a hefty snowstorm, over 150 constituents from across the state of Utah, arrived 8:00 a.m., January 30th on Salt Lake City’s Capital Hill to participate in democracy. Collaborating with AARP Utah, Community Action Partnership of Utah invited citizens and legislature representatives to communicate together in the hope of demystifying the political process.

Within a dominantly republican state, the sixth annual Democracy Day held a mock debate between Chairmen Jim Dabakis (D) and Thomas Wright (R). Each presented the differing views held by the two parties on issues currently in discussion by state citizens, including education and air quality in Utah. While their views were different, each Chairman showed a willingness to reach across party lines with laughter and a bit of friendly banter. Democracy Day is a time to show that political representatives are accessible to talk and listen to each person’s concerns. All it takes is a voice and the mere action of introducing yourself.

CAP Utah’s Executive Director, Paul Leggett, discusses the importance of the day, “We envision a Utah where economic access and opportunity is equal for all. A big part of this is helping people have their voice be heard in the legislative process, to not be intimidated by their representatives and to realize their perspective and opinion should be heard.” 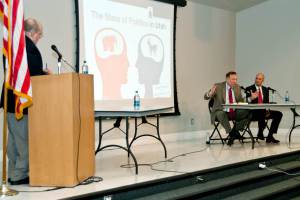 Though sometimes, it’s not the individual, but the large looming building on the hill that has people intimidated and mystified by politics. After a day of debates, lectures and talks, participants were invited to tour the capital with docents so they might feel more comfortable the next time they step through Democracy’s doors. Following tours, participants were invited to lunch with their representatives to voice issues or praise to House and Senate legislatures.

Democracy Day has become an annual event hosted by Community Action Partnership of Utah. Its success is thanks to collaboration and partnerships with other groups.

To find out more information and to get ideas about hosting a similar Democracy Day event in your state, contact Paul Leggett, at paul@caputah.org.