Data Corner: CSBG is More Than Just a Number

As someone who enjoys number crunching, I understand the power that data analysis can provide. There is a wealth of information and data in the recently released reports by the Urban Institute on CSBG. One report focuses on administrative (admin) expenditures, and as there is a federal efficiency measure on CSBG admin, it can be easy to focus on this one statistic. However, while we review the report in detail below, it is important to remember that CSBG is more than just a number.

Yesterday, the Urban Institute released reports commissioned by the Office of Community Services (OCS)  about CSBG ARRA and CSBG admin expenditures. The admin expenditures report reviews not only how CSBG funds are spent on administration, but also how agency-wide funds are spent at the local level. The report concludes that “CAAs [Community Action Agencies] appear to be comparatively good stewards of their financial resources.”

In the President’s FY 2012 Budget, the Administration modified its admin expenses efficiency measure (see below for more information), from a maximum of 19% of CSBG funds spent on admin, down to 17% for FY 2012, and 16% for FY 2013. Their justification for doing so is the fact that the actual administrative percentages had been decreasing over the last several years. On the surface makes sense, however a closer look at the data shows that the decreased efficiency measures may not be realistic, especially in the face of proposed budget cuts.

It’s true that the percentage of CSBG expended on admin functions at the local level have decreased (see the red line in the graph). But this has not been due to a decrease in the amount of CSBG dollars spent on CAA admin – this has remained fairly steady (see the dark blue line). Rather, the total CAA CSBG expenditures have been slightly increasing (light blue line), causing the admin dollars to represent a smaller percentage.  The steady amount of how much CSBG agencies used on admin shows that agencies across the country use CSBG in the most efficient and effective way possible. They leverage CSBG to gain many other funding streams to serve the needs of their communities. 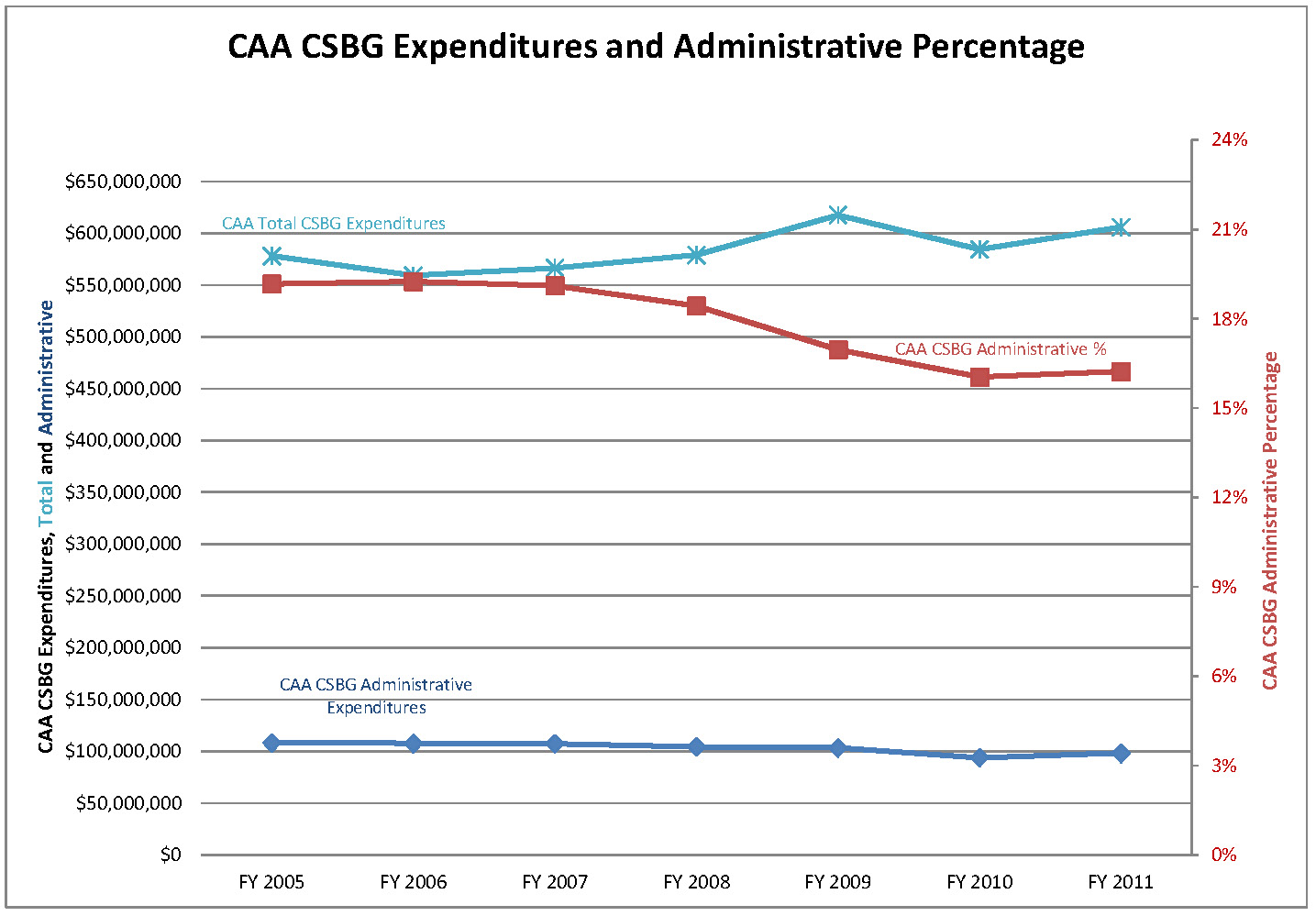 * For additional information on the Administration’s efficiency measure for CSBG, see page 192 of the Administration for Children and Families’ (ACF) Budget Justification: http://transition.acf.hhs.gov/sites/default/files/assets/CFS%20final.pdf