Recognized annually on April 22, Earth Day is the world’s largest event celebrating nature and supporting environmental protections. The first Earth day was held in 1970 and more than 20 million Americans participated through marches and lectures, making it one of the largest single-day public actions in history. By 1990 the environmental celebration had gone international and was recognized in over 100 nations. Public awareness of environmental issues has increased drastically since 1970, in part due to Earth Day celebrations’ commitment to ecological education. This year, on the 52nd Earth Day, we would like to recognize the contributions of the Department of Energy’s (DOE) Weatherization Assistance Program to environmental health and sustainability.

Just months after the 7th annual Earth Day, President Gerald Ford signed the Energy Conservation and Production Act, establishing a weatherization program to assist low-income Americans, especially children, the elderly, and those with disabilities. The Weatherization Assistance Program initially focused on temporary measures like window caulking and air sealing. However, by the 1980s the program evolved to include more impactful and professionalized services like energy audits. From the 1990s, through a program expansion in 2009’s American Recovery and Reinvestment Act, to today, the WAP has increased focus on societal environmental benefits and the use of technologies like renewable energy systems.

Weatherization measures in low-income households reduce utility costs to families by increasing energy efficiency. If less heat escapes through walls and windows due to WAP measures, then less energy is needed to heat a home over the winter. According to a DOE funded National Evaluation of the 2008 program year, low-income people who received weatherization services were 25% less likely to struggle with utility bills and 75% less likely to experience a utility shutoff. A significant number of American homes heat with bulk fuels like fuel oil, kerosene or propane, and weatherization measures in these homes can have outsized environmental benefits. Considering the nearly 100,000 homes weatherized in 2008, increased energy efficiency kept 2.25 million metric tons of carbon dioxide from the atmosphere or the equivalent of almost 400 thousand barrels of oil. 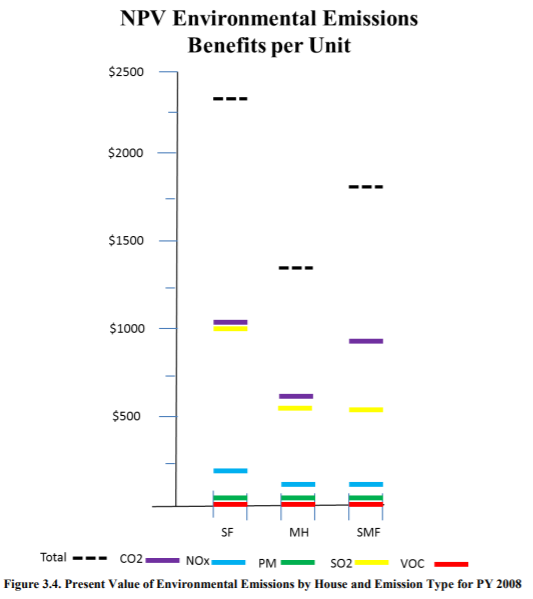 The same evaluation showed that the WAP is also effective at reducing home water use through increased efficiency. In 2008 this savings benefit was $186 per household or approximately $14,000,0000 in total. Reduced demand for water and production of wastewater, both of which have environmental benefits, was accomplished through installing measures like low flow showerheads and faucets. Drought conditions have been increasingly common in the United States in recent years, especially in the Southwest, so reduced water usage has clear environmental benefits.

An additional, rarely highlighted benefit of weatherization detailed in the ORNL report is a reduction in noise pollution. Weatherization can reduce the penetration of outdoor noise into indoor spaces, and vice versa, through the improvement of window, wall, and attic insulation. Outdoor noise is more than just an annoyance. The World Health Organization’s 2011 report titled Burden of Disease for Environmental Noise and subsequent studies have demonstrated a connection between outdoor transportation and industrial noise and negative impacts to mental and physical health. Furthermore, the largest sources of this industrial noise are disproportionately placed in low-income neighborhoods and communities of color. Noise pollution affects wildlife too, including fish and migratory birds, so increased noise insulation through weatherization keeps people healthy and nature undisturbed.

Earth Day is a celebration of nature and of human efforts to protect environments and ecosystems. Weatherization is one of these efforts, one that we will need to continually utilize as we make our homes, schools, and businesses more sustainable. The last half century has taught us much about the harm we have caused natural environments and about the tools we have to undo that harm. Earth Day has changed since 1970, the Weatherization Assistance Program has changed since 1976, and both will continue to change as we better address the energy needs of low-income people and the ecological needs of our planet.