At NASCSP, we pull together data from state offices and eligible entities nation-wide to produce the most comprehensive analysis of the federal Community Services Block Grant (CSBG) anti-poverty effort available anywhere at a national and state-by-state level. Our ability to quantify how we serve low-income communities across the nation sets us apart and demonstrates our value. Over 99% of the counties in the country have a local Community Action Agency (CAA) whose purpose is to reduce poverty by taking a comprehensive approach to each family and community. The 2014 Annual Report features outcomes, statistics, and demographic data from over 1,000 Community Action Agencies nationwide.

In FY 2013, the CSBG Network of CAAs touched the lives of millions of low-income people.  Over 1,000 CAAs provided services to 15.7 million individuals. This included 4.3 million children, 2 million people with disabilities, 2 million seniors, and 3 million people with no health insurance. The network also served over 6.7 million families. Out of those 6.7 million families, 70.3% were living below 100% of the Federal Poverty Guideline (FPG), and 32% were in severe poverty, reporting incomes at just 50% or less of the FPG. These numbers reflect the reality facing individuals and families living in poverty throughout the nation. 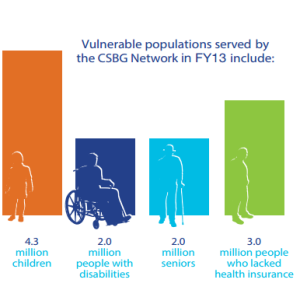 The CSBG Network continues to face a slow economic recovery, high long-term unemployment, and a lack of living wage jobs nationwide, creating a straining demand for services. But this anti-poverty network of over 1,000 state-managed local agencies remains committed to ensuring economic security for vulnerable populations.  The statistics outlined in this report demonstrate the strength and value of CSBG  as the national anti-poverty strategy that coordinates local, state, and federal efforts to secure a promising future for our nation.